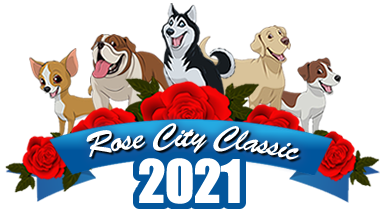 A short history of Rose City Classic
Dog Fanciers Association of Oregon (DFAO), the host club for the Rose City Classic (RCC), was founded in 1939, and after holding shows in several Oregon venues, settled in at the Portland Expo Center in 1948 where it has been ever since. Over the course of those 7 decades, it has earned the distinction of being the longest-running event held at Portland Expo. With the addition of Tualatin Kennel Club more than 30 years ago, the foundation of the dog show series known as the Rose City Classic was born.

The Rose City Classic is one of the most popular dog events in the US, and the biggest dog show series in the Pacific Northwest. Every January thousands of the best dogs in the country and their owners descend on Portland to compete at the RCC. Businesses near the show site report that the dog shows make their January. During the show, out of state exhibitors fill several nearby hotels, dine out at Portland restaurants and fill up their gas tanks at local stations. Due to its popularity, size and duration, the economic impact of RCC is estimated to be at least $3 million each year.

Fun for the whole family

In addition to the exhibitors that attend the RCC, spectators from all over Portland and Southwest Washington pour into the shows each year. That’s because Rose City Classic offers way more than a typical dog show. It not only provides competition in conformation (breed judging), obedience and rally, but also agility, Canine Good Citizen Testing, Trick Dogs, Temperament Testing, a class for 4-6 month-old puppies, and a fabulous student art contest with a dog theme for local youngsters.

Community Outreach
Each year Rose City Classic sponsors a student art contest with an exciting dog-related theme. This contest gives hundreds of kids the opportunity to prove how creative and talented they are.  Check out the RCC Art Gallery on this website to see examples of the students’ incredible artwork. Many schools and senior citizen centers take field trips to the show to see the artwork and watch the dogs in action. They come on Thursday and Friday when there are fewer spectators, parking is easier and there is more elbow room inside than on the weekend. Field trips can be arranged by contacting the RCC Coordinator.